Jane Nash from our Felixstowe office and her husband Keith recently arranged and hosted a music night to raise funds for their local St Elizbeth’s Hospice. 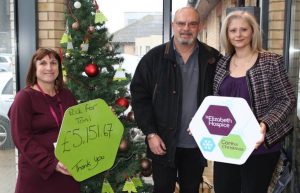 The night was a huge success, and they raised £1352 which came from a mixture of ticket sales, a charity raffle, and numerous additional donations into the buckets on the night. The Matthew Good Foundation then Double matched this sum with a contribution of £2704 taking the total to an amazing £4056!

150 guests all ‘rocked the night away’ to the tunes of ‘The Harry Issac Presley Operation’ who entertained the guests with many Elvis Presley favourites, but also a few modern non-Elvis tracks in the style of Elvis! They also had as a headline band, a local group called ‘Soap Your Auntie’, who specialise in ‘Rocking Up’ popular 1980’s hits.

The venue and the 2 bands provided their services for free, and Soap Your Auntie even donated all the proceeds from the sales of their CDs on the night to the collection! Once the band’s proceeds were added, and some further donations received after the event our final total was an even more amazing £5151.67, which was presented to Celia Joseph at the Hospice.

This event was the latest in a number of fundraising events the Nash family have been organising in memory of their late niece Toni, since she passed away at the Hospice back in 2017. Commenting on the latest event, Jane Nash said,

“The St Elizabeth Hospice was utterly amazing in supporting our family, and Toni when she needed it most, and they continue to do so even now. Their aim is to support people with a progressive illness and to help people to live well until they die, whilst also supporting those affected by the loss of a loved one.

When supporting adults, the Hospice is highly experienced and effective, however, they recognise that there is a gap in the current offering for young people. Legislation denotes that any young person, even those who have spent most of their lives being supported by the local East Anglian Children’s Hospice (EACH), have to move to the Adult hospice when they reach a certain age, which can be a very distressing experience, and a huge upheaval leaving the care of those they have known for much of their young lives. This completely new, predominantly adult environment can seriously affect a young person already struggling with illness.

St Elizabeth’s Hospice believes that young adults with progressive illnesses should be given the chance to enjoy life the same way that their peers do, and have big ambitions for enhancing their young adult services in future.

As a lifelong high-level Paediatric Nurse, this was an issue close to Toni’s heart, and one that we’ve chosen to fundraise for in her memory.”

The money raised at this latest event brings the total that the Nash family have raised for this campaign to a staggering £81,030.22 since starting in 2018. Congratulations to all involved in raising vital funds for such a worthy cause. 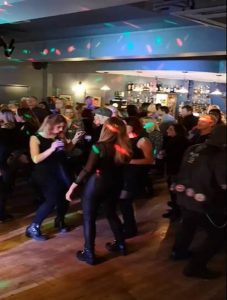