During this year’s lockdown, one of our members, Stuart Middleton, was inspired by frontline heroes in the NHS and the likes of Captain Tom Moore and decided to set out on his own challenge to raise funds for NHS Charities Together.

Somewhat limited by lockdown restrictions, Stuart, was fortunate enough to have a SkiErg in his garage that made the sport of Nordic skiing available to him without even leaving the house. Not quite the same as hitting the slopes I’m sure, but just as challenging! Over 75 days, Stuart skied 750km over 55 hours and burnt over 49,000 calories!

We caught up with Stuart to find out more about his gruelling challenge, which he completed on the 75th day after raising £520 for NHS Charities Together which the Foundation double matched to make a total of £1,560!

When you first decided to do the challenge, did you ever imagine you’d be doing it for 75 days?

No, I didn’t, but I have to admit, having got that far, I was disappointed that I couldn’t make it to 100 days. Unfortunately on 29th June, I pulled my hamstring racing with my triplets, and despite managing a week of skiing with one leg and a lot of bruises, it came time to stop after a trip to the hospital so that I could rest and recover. However, even though I didn’t make it to 100 days, my final ski on the 5th July coincided with the NHS celebrating its 75th birthday.

Skiing for 10km every single day must have been incredibly hard and physically draining, what kept you going when the going got tough?

My stubbornness mainly, and I wanted to prove that I could do it. As I’d committed to raising money I had the motivation to do it every day no matter what time I achieved. It was also my way of saying thank you to all the NHS staff who have an continue to work tirelessly throughout the coronavirus pandemic.

Did the challenge get harder or easier as time went on?

It didn’t get easier, but I did get a bit faster as Greg Lemond would have said! There was something that made each day hard, whether it was aching from the previous day, tiredness or just lack of motivation but you just have to push through it, and I tried to focus on reducing my time and passing some of the records.

How did it feel when you met your fundraising target?

I was really pleased, especially given everything that was going on at the time. It was nice to feel like I had done something to help the situation.

As well as raising funds for a worthy cause, did you get any other benefits from doing the challenge?

It gave me something to focus on and a reason to train each day which has probably been lacking a bit since I tore my hamstring. I felt like I was getting fitter, but the most significant thing was probably mental as it showed that I could endure more than I thought and that I could push myself further than most people would think. It also gave me a purpose which I probably needed with everything else that was going on, such as working from home, homeschooling and staying in the house.

The 75 days have been a hard slog which has seen me cover 750km in nearly 55 hours which has burnt over 49,000 calories. I’ve found out a lot of things about myself in that time, and I’ve done more than I ever thought I would when I started.

Thanks so much to all the people who have supported and sponsored me and helping me reach my target for NHS Charities Together, it has been a great help and has kept me going. Thanks also to the Matthew Good Foundation for tripling the impact of my efforts and helping me support such a good cause. 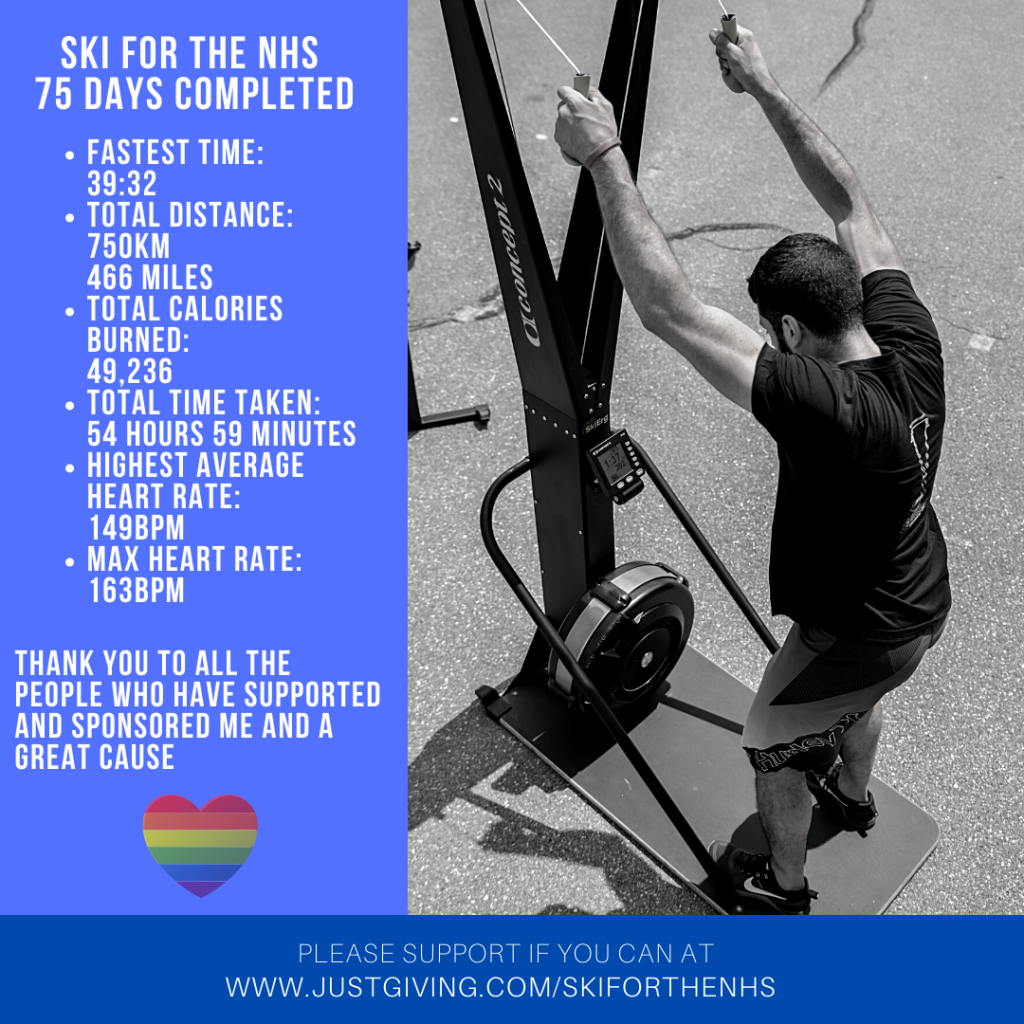