The Matthew Good Foundation was created in memory of Matthew Good who sadly passed away while running for charity. One of the aims of the Foundation is to promote safety and best practice in race medicine and treatment of illnesses commonly found during marathons and other similar events. These types of illnesses most commonly include, hypothermia (overheating), hypoglycaemia (low blood sugar), hyponatremia (low blood salt) and sudden cardiac arrest.

In 2013, in partnership with the American Road Racing Medical Society (ARRMS), the Foundation helped create the International Institute of Race Medicine (IIRM).

Matt was a fit and healthy young man. He did not smoke and took part in many other strenuous sports such as rock climbing, mountain biking and ski touring. For his honeymoon Isabel and Matt decided to go hiking and exploring in the Canadian Rockies and they would regularly go walking and camping on weekends.

In the months leading up to the Humber Half Marathon, Matt trained hard and even took part in a 10k achieving a fast time of 45 minutes. It was a huge shock to learn that his death was not related to an unknown underlying condition. It was immediately apparent this was not uncommon and many amateur runners and athletes die each year in the UK and around the world whilst taking part in Marathons, Triathlons and other endurance events.

The family quickly decided that something could be done and began a project, with the help of the Foundation, to try to reduce the number of deaths in perfectly healthy adults, through both research and education.

In 2013, in partnership with the American Road Racing Medical Society (ARRMS), the Foundation helped create the International Institute of Race Medicine (IIRM).

To promote best practice in race medicine. This is the medical practice and treatment of illnesses commonly found during marathons and other similar events. These types of illnesses most commonly include, hypothermia (overheating), hypoglycaemia (low blood sugar), hyponatremia (low blood salt) and finally sudden cardiac arrest.

The International Institute for Race Medicine continues to grow with the help of a further grant from the Matthew Good Foundation which has enabled a number of marathons and smaller races to become members of the IIRM and benefit from its guidance free of charge.

With the help of Loughborough University we have been working towards a single medical guidebook that all races can work from to ensure the best practice is adhered to. This is now 95% complete and undergoing the final stages of approval. Watch this space!

The organisation that we help to form, the IIRM, has a goal of producing distance learning which medical volunteers and race organisers can learn from. In October we visited the Chicago Marathon who kindly volunteer to help us with some of the key parts of organising a road race. You can view an example of these on the IIRM Youtube Channel. 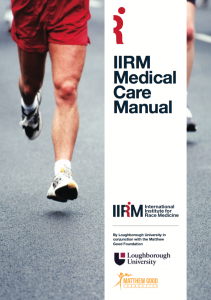 When we were half way through our research project with Loughborough University we were invited to provide an update on our progress at the 31st London Marathon Medical Conference. For more info see the news release here.

Visit to the KSI, Connecticut November 2013

The first organisation that the Foundation contacted in connection with this project was the Korey Stringer Institute. In November we had the chance to visit them in Storrs, Connecticut for a very insightful meeting with Steve and Phil from Loughborough. They continue to plendge support to the Foundation in various ways for which we are greatful to both the KSI, their team and their executive director, Doug Casa.

In November 2013, Tim Good (Foundation Chairman), Steve Meres (Research Projected Leader) and Phil Watson (Loughborough University Dr) visited New York to discuss the progress of the IIRM, an organisation we are supporting to help improve the standard of medical care at marathons. The trip was hugely successful with many new alliances formed and an invaluable chance to observe the way in which the NYM performs medical and organisational best practice. 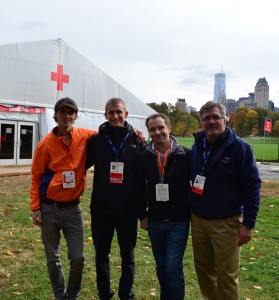 After a rigorous selection process, Stephen Meres from Loughborough University has been the chosen for a year-long research study into Race Medicine and the practices of both large and small endurance races around the world. From this we hope that a range of Critically Appraised Topics (CAT’s) will form a published document that will help pave the way for a best practice framework and in the long term, improve athlete safety in small and medium races with low resources.

Tim Good was invited by the organisers of the London Marathon to visit and take part in the medical preparations leading up this this years race. Together with Phil Watson from Loughborough University they met with Doug Casa, (a leading doctor and research in heat exhaustion and heat illness in sport) to discuss sharing of data and information for both the IIRM and research with Loughborough. They also spent the weekend with Dr Lars Brechtel from the Berlin Marathon, George Champas from the Chicago Marathon and Pierre D’Hemecourt from the Boston Marathon discussing various issues in relation to the IIRM and research. After the Medical Conference Tim, Phil, George and Lars also had the pleasure of meeting with Andrew Taylor from the UKA RunBritain Medical Advisory Group, discussing additional research opportunities moving forward.

For the past 12 months the Foundation has become very closely associated with the medical leaders at the Boston Marathon and specifically Chris Troyanos and Pierre D’Hemecourt. Both were very close to the bombings that took place at the Boston Marathon and undoubtedly their skill and courage, along with the help of other medical staff in their teams, ensured that all the victims were treated instantly and lives were saved. Our thoughts go out to the victims, their families and to the medical staff that acted so bravely on the day!

Throughout 2012 we were in close contact with the American Road Race Medical Society who also had a vision of sharing all the best practices of the bigger marathons with the many smaller races. This would allow them to benefit from the wealth of experience and research that the larger events have had access to. As a Foundation we have now committed ourselves to helping them achieve this goal on a global scale with their launch of the International Institute for Race Medicine (IIRM). Initially this will be aimed at the US and UK but in time throughout Europe and Asia.

In early October Tim Good was invited by the organisers and medical director of the Chicago Marathon to review their practices first hand during their 35th annual race. Chicago is renowned internationally to be one of the leading events in race medicine. George Chiampas, Medical Director at the race has made great advances in implementing many new protocols, procedures and medical advances over the years and is directly involved in forming an organisation to promote best practice in race medicine. We are already supporting this new venture in taking their first steps.

As part of the project we approached the leading sports Science institute, Loughborough University. We quickly found common ground and began discussing the possibility of commissioning the University to help in year long program to research what current research is out there already, what the current best practices are and what gaps need to be filled. Dr Phillip Watson will be leading the project and over the coming months will form an action plan to be implemented later this year.

During the marathon in which Matt died, running a short distance behind was Chris Price, a regular distance runner. Chris, saw Matt receiving medical attention and was so moved by his passing that he has been in close contact with the Foundation ever since. He is now aiming to raise of £32,000 by running 32 marathons in 2012! For more information please see his dedicated fund raising page.

From our research into similar cases we have found a trend. That being that an unusual amount of cases when an athlete died during a marathon happened in the last mile. We felt this is significant considering Matt also died within only 900 yards of the finishing line. This trend seems to be regardless of the race distance and may be a warning sign that the last push to the finish could be especially dangerous during hot weather. We’re going to follow this lead up and see if there is any significant proof for our findings 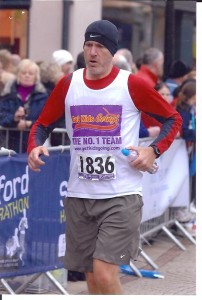 Following the death of a man in his early 30’s during the Bristol Half Marathon, it only confounded the significance of what we’re doing. We are now appealing to the families who lost their loved ones in similar circumstances to see if we can share information and find a trend or similarities in the athletes or the conditions on the day. We’re also appealing to people who had serious problems during a race but managed to pull through.

Marathon Talk is a hugely popular weekly pod-cast for all kinds of distance runners. The show is hosted by two experienced runners Martin Yellin & Tom Williams. They kindly paid respect to Matt in the first show after he died and in their most recent show, no. 84, have agreed to work with the foundation and Nuffield Health to try and forge some ideas on moving forward with research and education for sport induced heat stroke. We’ll keep you up-to-date on any progress. 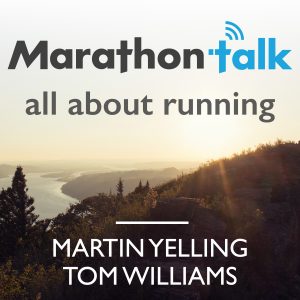 In August 2011, the foundation made its first significant steps and was kindly approached by the Korey Stringer Institute with an offering of assistance. The KSI is a not-for-profit organisation housed at the Neag School of Education at the University of Connecticut dedicated to the prevention of sudden death in sports, with a focus on exertional heat stroke (EHS).

This alliance is of great importance since the leading Professor on the effects of heat stroke in the US is closely tied to the KSI. We held talks with them to determine what links could be made with the cause of Matt’s death and their research with the hope of finding the missing link as to why so little is know about heat stroke in athletes and why people continue to die each year.

Additionally, Tim Good was in touch with a leading heart specialist in Bristol who has dealt with patients suffering similar symptoms to those of Matt on the day of the race. He hopes to put the Foundation in touch with a special research department at the University of Bath dependent on the findings from the KSI.