Ken Jackson from TEPS ran a 5k event to raise money for Hull Boxing Club which supports youngsters getting into the sport. A massive effort as he suffers with hips problems and is waiting for a hip replacement operation. He raised £590 which the Foundation added an extra £1000 to.

The Hull Boxing Centre had been given the opportunity to take a team of Boxers to take part in a 3 Day International Boxing Tournament in Dublin from 30th June to 2nd July 2017.
It was a fantastic opportunity for the Boxers to represent our Club, City & Country in an Amateur Boxing Tournament involving other Boxers from many countries including: England, Ireland, Germany, Scotland, Wales, Sweden, France, Lithuania, Norway, Belgium, Netherlands, USA, France & Greece who already scheduled to participate in the tournament this year. The cost per Boxer/Coach was £300 and they needed to raise approx £3,300 to make this opportunity possible. The money raised went a good way towards this! 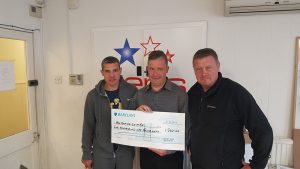